Transcendence is the only real alternative to extinction.

We are cosmologizing the human.

Human consciousness has been on a long journey. Our awareness has shifted from the earlier archaic, animistic mode; to the religious and scientific; and then later to an industrial, mechanistic consciousness. Our ancestors did not live in the same world as we live in now, nor would they have exhibited the same kind of consciousness as we currently do. Consciousness is not a fixed phenomenon or static expression—it changes alongside the flows and fluxes of history, time, and environment.

An integral mode of consciousness began to emerge after the successive industrial revolutions that adapted a “machine style” perspective of control, power, and efficiency; and which eventually propelled global society toward excessive consumption and accelerated growth. This integral consciousness emerged parallel to a new era of technological innovation. That is, a consciousness that reflects dynamics of connection and communication across condensed time and space.

It can be said that we have gone from worshipping faith, then objective knowledge, to finally arriving at an understanding that everything depends upon the subjective self. Throughout this whole journey, like the hero that traverses through the underworld, we have ventured far in search of a mode of being – a state of consciousness and awareness – that can benefit us. A place of conscious self-awareness, which may be termed as sacred, has been present within humanity from the very beginning. It never went away – only we went away. This situation is similar to the behavior of individuals as observed by psychologist Abraham Maslow. Maslow noted how people step back from doing something important, believing others will do it instead. Somewhere along the way we made an internal agreement to stay back and not to overestimate our abilities. It appears that too many of us for too long have avoided being ‘fully human’ and content to remain as ‘only human.’

Regardless of how we may articulate it, the sacred presence within humanity cannot be denied as it is an expression of the evolutionary impulse. As such, it does not stop at transitional stages but is compelled to push toward ever higher states and degrees of consciousness. We are in the hands of a force that we can barely recognize. Throughout the long journey of our development human beings have been deeply involved in this sacred unfolding (for want of a better expression). What this means is that the transcendental yearning to go beyond one’s present state persists in each of us. All of this, our very humanism, should be an inherent part of our cultural mythology. Or at least should influence how we understand and perceive our reality.

Our experience of reality is never pure, but always mediated through consciousness in its various states of reception. The myths we hold as an individual, a culture, and as a collective species reflects our own state of mind. Unfortunately, humanity has for far too long considered itself separate from the cosmos. We feel as if exiled upon a dead planet somewhere upon the fringes of our galaxy. If we do not fully know ourselves it may be because our cultural myths (our narratives) place us within a cosmically isolated reality. To be truly integrated we must recognize that we participate not only upon the planet but also within a grander mythology. In other words, we should accept our responsibility as having sacred agency. After all, the history of human civilization is the history of ourselves as change agents.

The philosopher Karl Jaspers referred to the period from 800–200 BCE as the Axial Age. It was a time that, according to Jaspers, similar expressions of new thinking appeared in Persia, India, China, and the Western world. He indicated also that the Axial Age represented an in-between period, where old certainties had lost their validity and new ones were yet to emerge. The new religions that arose in this time—Hinduism, Buddhism, Confucianism, Taoism, and monotheism—influenced new thinking in terms of individuality, identity, and the human condition. These new emerging religions helped to catalyze new forms of thinking and expressions of human consciousness. And yet, over time, we have seen how they were not wholly successful in establishing permanent developmental change.

Social thinker Duane Elgin has referred to our present time as the Second Axial Age in that religions of separation are being replaced by a new spirit of communion. Elgin says that the world is moving into a spiritual communion and empathic connection with a living cosmos. Maybe we are in need of being reminded that there is nowhere else to go when the cosmos already exists within us. This empathic consciousness that Elgin speaks of can be related to the emerging integral consciousness that reflects our increased interconnectivity through our global networks. This connects with our innate, fundamental drive to seek out communion and coherence. A mode of human consciousness that seeks coherence is itself a reflection of a universal natural order. In other words, it is a self-referencing feedback loop. And so now allow me to speculate.

My suggestion is that a purpose for sentient human life upon this planet is as a driver toward establishing a coherent planetary consciousness. In other words, to act as a channel to ‘bring in’ – i.e., receive consciousness – from the consciousness field and to manifest it specifically (that is, to project it) within our earthly reality. There is a correlation here with Aurobindo’s concept of the Supermind/Overmind, in that a form of higher consciousness can be made immanent upon the material plane. Aurobindo referred to this as human evolution moving towards a suprarational or spiritual age that exhibits an intuitive or Gnostic mode of consciousness.

The finer channeling of the consciousness field would require the adequate preparation of human receptivity. That is, our minds and even perhaps our nervous system would need to be sufficiently prepared in order to successfully actualize this potential. By raising localized aspects of human consciousness through individual perceptions and awareness we may better increase the coherence of consciousness amongst the whole—a form of collective transcendence through species consciousness. And this can be made tangible by local agents – i.e., each one of us – becoming aware and conscious in everyday acts of right thinking, right behavior, and right being. It is a mode of sensitive and balanced consciousness that comes only with considerable effort and discipline. This discipline forms part of the developmental awakening within each individual, and which then influences our perceptions and life experiences.

What we are seeing emerge across the world is the early stirrings of a planetary civilization; one that is driving toward diversity and coherence. And as we connect and share our thoughts, ideas, and visions we will be helping to strengthen the signal or reception of consciousness and thus the bringing in of the grander cosmic consciousness. A planetary consciousness spread across the Earth may not only be a real possibility, it may very well be a fundamental cosmic purpose.

Human Purpose in the Sacred Order

Recent scientific discoveries indicate that our reality is coded from beyond cosmic space-time; and as such our reality behaves in a way consistent with what we know as a holographic projection. That is, the totality of our reality is in-formed from a deep consciousness beyond it. The known cosmos thus acts as a nonlocal consciousness field, of which sentient life forms as localized manifestations. It has been inferred through various religious and sacred texts, and various wisdom traditions, that the universe (material reality) came into being as a way for its source to ‘know itself.’ This is reminiscent of ‘know thyself,’ the famous maxim from the Oracle of Delphi. Or, in modern language, we can say that we are the eyes through which the cosmos contemplates itself.

Self-consciousness is generally attributed to those sentient organisms at a high peak of mental development. Self-reflection is one of the prized attributes of self-consciousness. Furthermore, self-realization is something we credit to each attained individual consciousness. A realization of the self is part of the path of human actualization. It is a path in which purpose and meaning are core drivers and potentials. Human beings – or we could say human becomings – are naturally driven by a longing, a purpose, and this signifies a connection with a sacred impulse. In our times human civilization has shifted into an unprecedented era of self-actualization. The psychologist Abraham Maslow, who originated a scale of self-actualization, recognized that one of the characteristics of self-actualizers is that they have far less doubt about what is right and wrong than normal people do, and they act upon this inner knowing.

As each one of us wakes up (to use a common metaphor) the cosmic net shines that little bit brighter. If enough individual consciousnesses awake upon this planet we may catalyze a localized planetary field into collective conscious awareness. In this case, we are each a conscious agent of cosmic realization and immanence. We each have an obligation in our existence on this planet to raise our individual, localized expressions of consciousness. In doing so, we both infect and inspire others in our lives to raise theirs, as well as reflecting back our conscious contribution into the cosmic consciousness. In this way, we can act as both citizens of the cosmos as well as caretakers for the sacred order.

We have now arrived at a place where we can recognize and accept that our reality is not a static affair but an active, fluid realm that makes demands upon us. And in knowing this we are compelled to embrace the obligations and responsibilities that come with this role. We are on a path of completion – of conscious completion and communion – which is the eternal path of the sacred. Through this sacred journey of completion we connect and commune with everything else in our reality, and beyond. As human beings we have been tasked with this sacred endeavor. We can become aware of our creative contribution to reality and this can give us meaning and purpose. Perhaps this will finally provide us with our place in the cosmos. And how can we walk this path?

We can take this journey through our small acts of conscious awareness – our thoughts, attitudes, behavior, and our everyday actions. Upon the next level, our social changes and emerging technologies may form part of this process, establishing an extended mind and empathic embrace across the face of the earth. Magic is alive; magic never died. Everything is ultimately a technology of the soul; and all magic, all science, and all human expression is a part of this soulful technology. And with each step forward we move closer to soulful communion with a grand conscious and sacred order.

The sacred impulse animates the expression of consciousness at the individual, collective, and planetary level. And one day we may witness a grand awakening, unprecedented upon this planet, and this may very well be the purpose for sentient life, as conscious agents of the sacred order. This is likely to be more reality than fantasy. The hidden treasure that is at the very core of our existence wishes to be known – for us to know ourselves – by our individual journeys of self-realization.  We are not alone. A great planetary future awaits us, as a great treasure that wishes for communion. Welcome to the new story.

Truth has to appear only once, in a single mind, for it to be impossible for anything ever to prevent it from spreading universally and setting everything ablaze.

Thought of the day 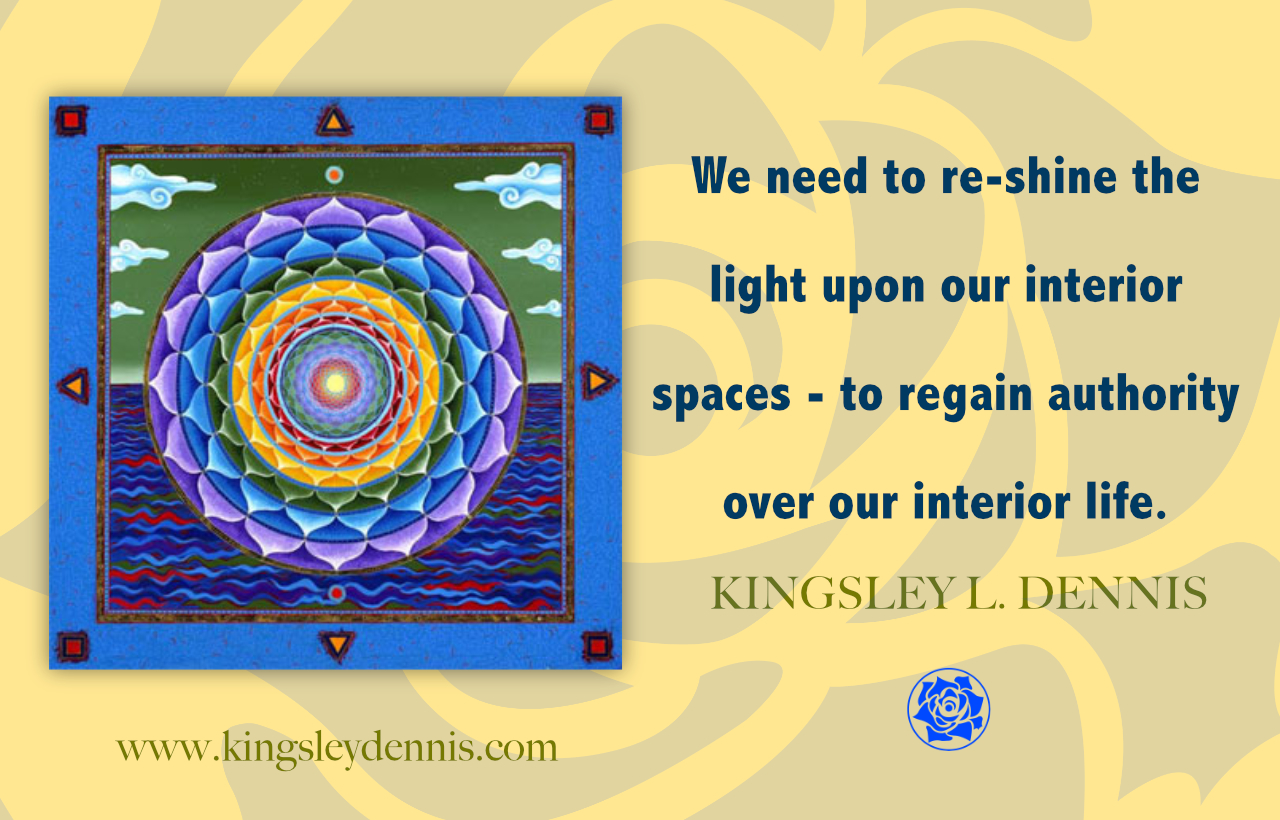